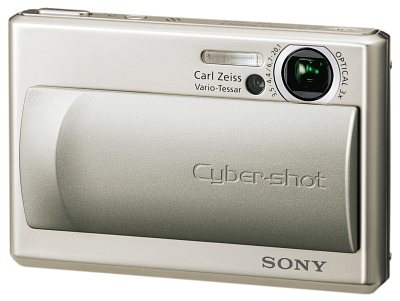 The Cybershot DSC-T1 is a 5 megapixel (1/2.4" CCD) camera which features an ultra-slim pocket design, a 3X Carl Zeiss® Vario-Tessar® optical lens lens (38~114mm 35mm equivalent, f3.5~4.4) that operates within the camera rather than extending out, and a huge 2.5 inch LCD monitor with 211k Pixels, and a Transflective design which reflects ambient light for increased brightness. The DSC-T1 also has a very fast image processor (Sony's Real Imaging Processor) which allows full resolution images to be shot at 1 second intervals and there is a burst mode which takes four image in under 2 seconds. The DSC-T1 has a very fast startup time of just over 1 second and has other impressive specifications including Clear Color and Clear Luminance Noise Reduction, Slow Shutter NR subtractive noise reduction for long exposures, Live Histogram display in record and playback modes, 4 Mode flash (Auto/On/Off/Slow Synchro), TTL Pre-flash metering, red-eye reduction selectable in all modes, Scene Mode w/8 presets, 49 Segment Multi-pattern measuring exposure system and Spot meter modes a 5 area multi-point AF and multi-pattern AE as well as AF Illuminator low light focusing assist. The T1 camera is further capable of capturing and playing back high resolution moving images in MPEG-VX Fine mode (640 by 480 resolution at 30 frames per second with sound) with use of optional Memory Stick PRO Duo* cards which Sony claims is "good enough to make onlookers believe that it was captured with a digital camcorder." The very slim and light-weight design of this power packed 5 MegaPixel camera (about the size of a credit card according to Sony) is further made possible by the newly designed matchbook sized Infolithium® battery system and by use of the smaller Memory Stick Duo format cards. Sony indicates that the T1 is only 7/8th an inch in width and weighs just 6.6 ounces. Included in the box is a 32MB Duo Memory card, an Memory Stick/Duo adaptor and an AC Adaptor/charger, cradle. The DSC-T1 will be available in January 2004 for about $550.00. 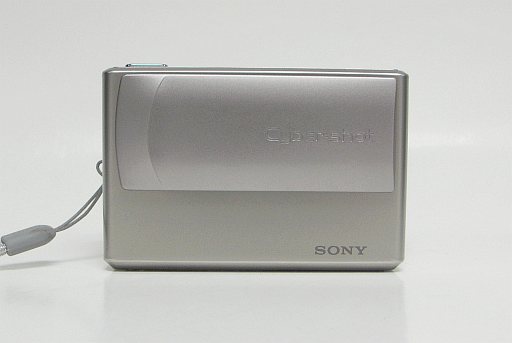 The Sony T1 is a tiny 5 megapixel Camera with a sliding cover that protects the lens while not in use.
The camera is very thin, it has a fairly flat body that is rectangular in shape, making it very compact.
The sliding lens cover is somewhat rounded and does stick out about 1/8 of an inch,
however it opens very easily once you know what to do. 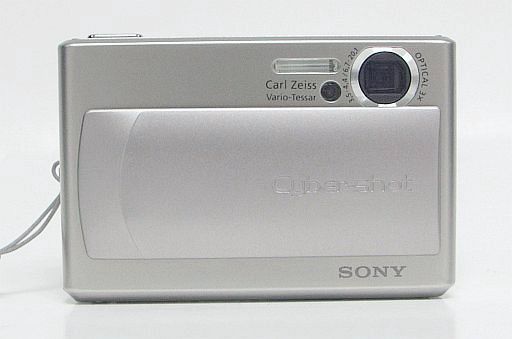 Underneath we find a Carl Zeiss Vario-Tessar Lens with 3 X Optical Zoom
that does not extend outside the body of the camera.
Next to the lens is the small flash unit, which is good up to only about 8 feet,
and it does only an average job reducing red-eye.
The smaller round object next to the lens is an Auto Focus assist light which can emit
a bright red light to help the focus lock in, especially in dark rooms or low-lighting 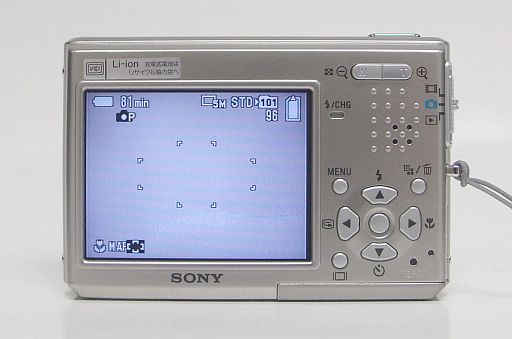 On the back side of the camera there is a HUGE 2.5 inch LCD screen
that works very well to help frame shot, even in bright sunlight.
In the upper right corner is the zoom button, with the operations button
on the right side allowing you to set the camera into Movie Recording Mode, Picture Mode, and Playback Mode. 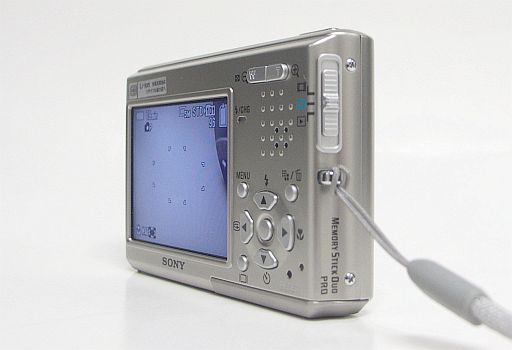 The Sony T1 does take Memory Stick Duo cards, and it also accepts the new Memory Stick Duo Pro cards,
which allow the camera to record movies at 640 by 480 resolution, 30 frames per second, up to the cards capacity. 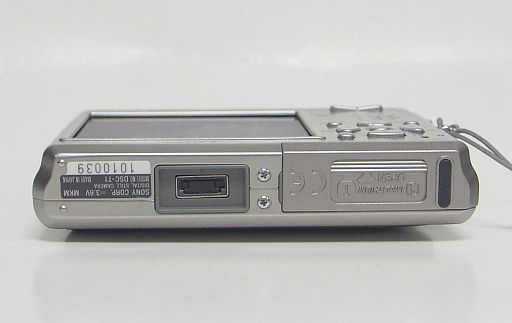 On the bottom of the T1 you can see the port for the base unit which is how you charge
the camera, and it allows USB transfers to your PC.
On the right side of the picture you can also see the cover for the Battery and the Memory Stick Duo. 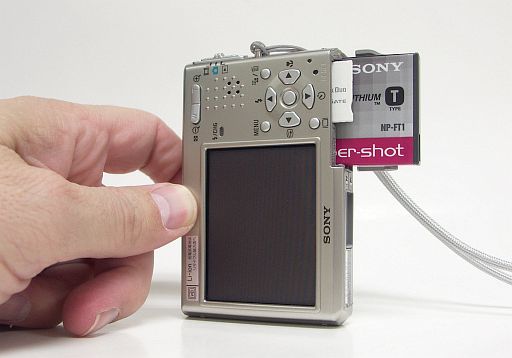 The Memory Stick Do and Rechargeable Lithium Battery Type T, Model MP-FT1
fit side by side in their own seperate slots. The camera charges with the Battery inside while
the camera is sitting in a platic docking unit that also has a USB port for image transfers. 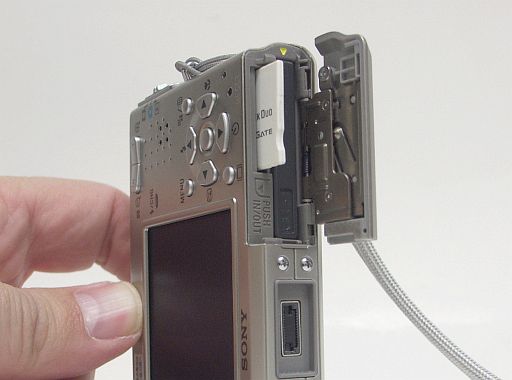 The Battery and Memory Stick Cover Door Locks in a closed position keeping both items secure.
However, the Battery itself is not latched in, and will fall out into your hand if you open the door
and turn the bottom toward the ground, letting Gravity take over. 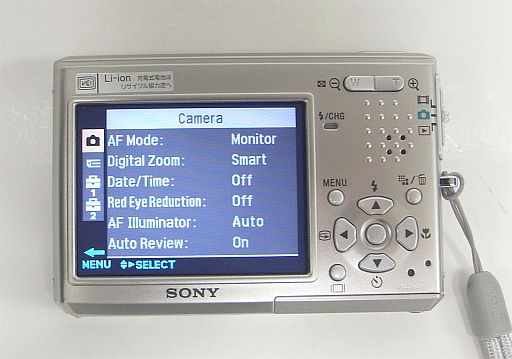 The T1 has a nice bright 2.5 inch LCD color Display, which works well. There is no viewfinder.
The screen Menus are similar to older Sony cameras and they appear brightly and work very fast!
There is a speaker on the back for playback of sound and movie audio
and a yellow charge light for when the unit is in the cradle.
The controls for selecting the Menu, image quality/delete, flash selection,
macro mode, timer, quick replay and the display toggle are all found in the lower right corner. 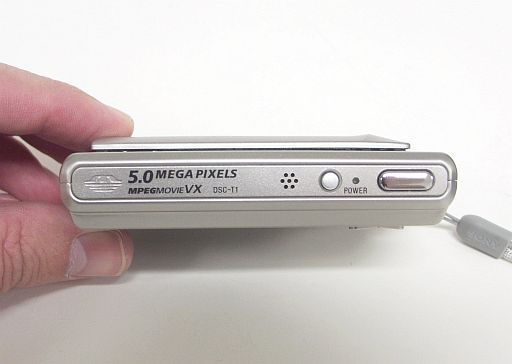 Here is the top of the Sony DSC-T1 camera,showing the speaker for Movies with sound, the power button
the Green Power Button displays once power is in fact on, and on the far right is the shutter button.
The camera is very thin, and yet it is very solid and actually feels slightly heavy for its size. 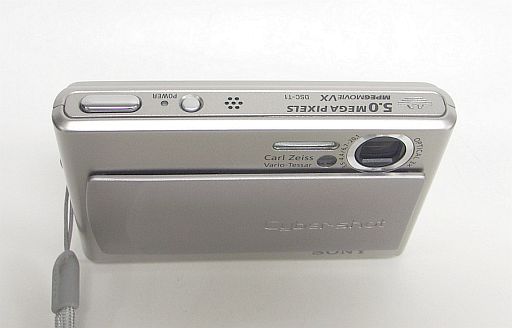 Another View of the top of the camera.
Notice how close the flash is to the lens, which does make Red-Eye and issue. 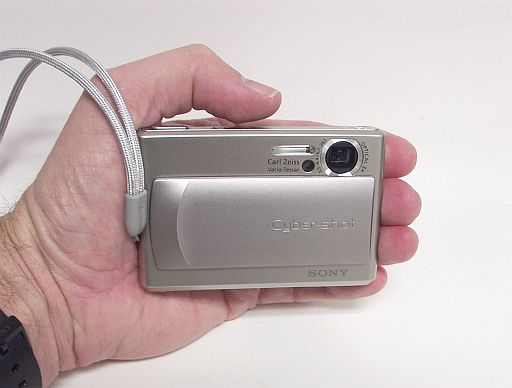 The Sony T1 is truly a camera that can fit in the palm of your hand! 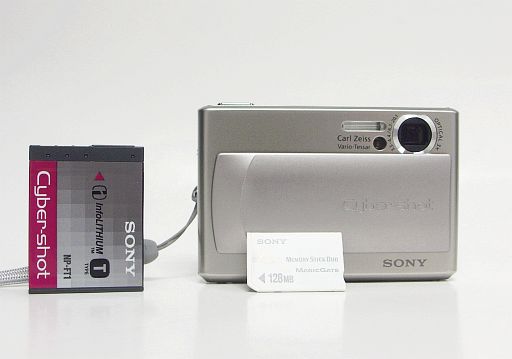 We will have much more coverage of the Sony DSC T1 just as soon as we get a final Production Level Camera.
DISCUSS THE SONY DSC-T1 IN OUR SONY DIGITAL CAMERA FORUM!
SEE OUR INITIAL FIRST IMPRESSIONS WHICH ARE POSTED HERE!
HERE IS OUR INITIAL NEWS STORY WITH FEATURES AND FURTHER INFO
PRODUCT PREVIEW PAGE WITH SONY DSC-T1 PRESS RELEASE