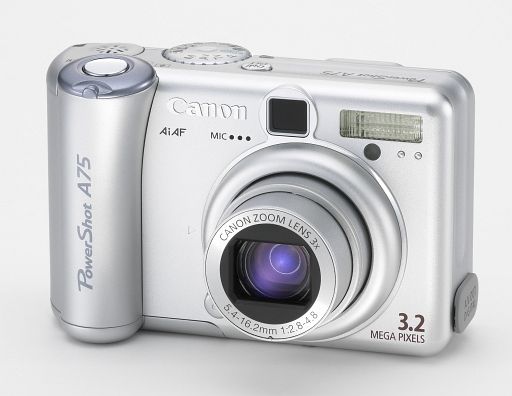 1. Canon PowerShot A310 - This small, compact and affordable pocket sized camera replaces the current A300 model but now ads a Print/Share button on the back of the camera. The new print button works to automatically make prints and/or transfers to a computer with one press of a button as there is no menu. This camera has a fixed lens, so there is no optical zoom, although there is an ability to use a 5.1X digital zoom. Both these new A-Series cameras use a Compact Flash Type I card and AA batteries with the A310 only needing two, and the A75 taking 4. The PowerShot A310 is due in stores in April at a price of just $199.

2. Canon PowerShot A75 - a 3 megapixel, 3X (35 to 105) optical zoom camera which replaces the current A70 by also adding the Print Share button on the back. In addition the new A75 has a more curved look and feel to the hand grip and it is going to a bigger 1.8 inch LCD flip screen on the back with increased 118,000 pixel resolution for brighter and improved display. The A75 also has new and additional scene modes such as underwater photography, foliage, and beach. There is also a new Postcard Date Imprint mode for sending out dated postcards with auto cropping for ease of printing out 4 by 6 inch postcards. Other improved features on the PowerShot A75 include the camera's new nine-point autofocus system (improved from the A70's five-point system). Canon indicates that the camera is able to evaluate a larger percentage of the picture area, and thus it improves the odds of locking on to the desired subject quickly. The A75 also features an override function that lets one choose between center-area autofocus manual focusing. Finally, the A75 has an image orientation sensor built-in to rotate pictures automatically as needed. Canon indicates in their materials that the A75 will at 3.2 megapixels will be the lowest megapixel camera now offered by Canon. The PowerShot A75 is also expected to ship in April, at a price of $299.

LAS VEGAS (PMA, BOOTH # E11), Feb. 9, 2004 - Canon continues to make digital photography accessible, affordable and enjoyable for users of all skill levels with the introduction today of two newly enhanced PowerShot point and shoot digital cameras. From the simplified sophistication of the feature-filled and versatile 3.2 megapixel PowerShot A75 model with its 3x optical and 3.2x digital zoom to the amazingly economical entry-level 3.2 megapixel PowerShot A310 digital camera with its 5.1x digital zoom lens, these two digital cameras provide a compact and comfortable introduction to the fun and freedom of digital photography Canon style.

"Whether you are a professional photographer earning a living with our top-of-the-line equipment; an advanced amateur or photo enthusiast, or a person who simply wishes to capture, save and share meaningful memories, personal milestones and family functions, we are committed to creating Canon cameras that have a place in your life," states Yukiaki Hashimoto, senior vice president and general manager of the consumer imaging group at Canon U.S.A., Inc, a subsidiary of Canon Inc. (NYSE:CAJ). "These two PowerShot cameras offer a warm welcome to all who wish to experience the fun of digital photography first-hand and the satisfaction of achieving remarkable results quickly, easily and affordably."

Canon's new Direct Transfer function offers users five options to download images to Windows computers covering everything from all images in the camera, all new images in the camera, user-selected individual images, images selected for batch printing and even a setting to create Windows Wallpaper from an image. Finally, Canon's new Direct Print options - in conjunction with Canon CP-type printers - permit creation of passport style ID prints on 4x6 paper as well various print sizes (selectable on the cameras' menu). Direct Print also offers users the opportunity to print thumbnail frame sequences from movie clips generated in the camera and output to a Canon CP Printer.

Like all A-Series PowerShot digital cameras, the new A75 and A310 models utilize Type I CompactFlash card media (32MB included) and are powered by AA batteries (four with the A75 and only two with the A310) or by optional rechargeable Canon Alkaline NiMH (Nickel Metal Hydride NB4-200 AA-size batteries).

The DIGIC™ Difference
Image quality with both new digital cameras is enhanced and improved as a result of Canon's proprietary DIGIC (Digital Imaging Integrated Circuit) chip processor. Introduced in 2003, DIGIC combines the roles of image processing and camera function control into one chip resulting in faster display and write times for each image and lower power consumption, extending battery life. Moreover, because DIGIC technology was designed specifically for use in digital cameras it is also capable of handling JPEG compression and expansion; memory card control; LCD/Video control and processing gain control (control of CCD signal amplification); Auto Exposure' Auto Focus; Auto White Balance control and most other functions.

The PowerShot A75 features a 3x (35-105mm equivalent) Canon optical zoom lens with a 3.2x digital zoom lens and can focus as close as 2 inches from the subject (in macro setting). New for 2004, the A75 digital camera features a larger and markedly improved 1.8-inch 118,000-pixel LCD monitor with a histogram display and a zoom capability of up to 10x on playback. Among the other upgraded features on the PowerShot A75 is the camera's new nine-point autofocus system (improved from the A70's five-point system). This feature enables the camera to evaluate a larger percentage of the picture area, and improves the odds of locking on to the desired subject instantly. For photographers who wish to take control of the focusing, the A75 features an override function that lets them choose between center-area autofocus or good, old-fashioned manual focusing as they wish.

Like its A70 predecessor, the PowerShot A75 digital camera has a built-in flash with automatic red-eye reduction and Slow Sync settings and a maximum range of 14 feet. The camera's standard exposure modes are Auto, Program, Manual, Shutter-priority and Aperture-priority with other shooting mode options offered including Portrait, Landscape, Night Scene, Fast Shutter, Slow Shutter, Movie and Stitch Assist.

New for 2004, the PowerShot A75 digital camera also features an additional Special Scene mode that optimizes image quality for six common shooting conditions: Indoors, Foliage, Snow, Beach, Fireworks, and Underwater. (For the Underwater mode, an optional underwater case, waterproof to 130 feet, is required.) The camera is also equipped with an orientation sensor that automatically detects vertical or horizontal shooting and correctly positions the image when playing back on the camera's monitor or using Canon software.

The camera's new Postcard Date Imprint mode provides a user selectable date stamp that can be imprinted in the corner of a picture, similar to those found on 35mm "QD"(Quartz Date) cameras. When selected, the Postcard mode also deliberately crops the image creating a slightly longer rectangle to fill a 4 x 6 postcard. When shooting in Postcard mode the camera automatically reduces the resolution to 1600 x 1200 with fine compression (an ideal setting for 4 x 6 images with no need for the user to manually set the resolution and compression). 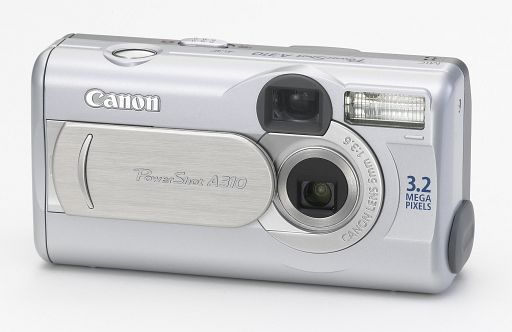 While the Viewfinder/LCD monitor display on the PowerShot A310 digital camera is 1.5 inches and 78,000 pixels (compared with the model A75's 1.8 inch/118,000 pixel LCD), it nonetheless features the same 2x -10x zooming capability on playback.

Like its "big brother," the PowerShot A75, the PowerShot A310 features Canon's new Print/Share button for simplified, one-touch Direct Printing to Canon and PictBridge-compatible printers as well as one-touch downloading to Windows XP/Me/2000/98 computers. The PowerShot A310 also supports PTP (Picture Transfer Protocol), making it fully compatible with Mac OS X.

The PowerShot A75 and PowerShot A310 will be in stores April for estimated street prices of *$299 and *$199 respectively.

Canon U.S.A., Inc. delivers consumer, business-to-business, and industrial imaging solutions. The Company is listed as one of Fortune's Most Admired Companies in America, and is ranked #39 on the Business Week list of "Top 100 Brands." Its parent company Canon Inc. (NYSE: CAJ) is a top patent-holder of technology, ranking second overall in the U.S. in 2003, with global revenues of $24.5 billion. Canon U.S.A. employs more than 10,000 people at over 30 locations. For more information, visit www.usa.canon.com.

DIGIC is a trademark of Canon Inc.
PictBridge is a trademark.
All referenced product names, and other marks, are trademarks of their respective owners.
* Estimated Selling Price: Actual prices set by dealer are subject to change.